With the Metaverse now becoming more of a thing, the race is on to lead the market in relatively cheap, lightweight headsets that will allow people to get the full VR experience that the media requires, but without breaking the bank. There are plenty of contenders to join the best-selling Oculus Quest 2, with the Meta Quest 3 expected around Q2 this year, the MeganeX around the same time, and the updated PSVR early in 2023, the devices vying for dominance are stacking up.

However, one of the most anticipated of the next generation of devices is the Magic Leap 2 from, well, Magic Leap.

The Magic Leap Corporation formed in 2010, and was initially focused on creating a graphic novel and a movie, but pretty soon shifted into technology and the development of an Augmented Reality (AR) headset. The rumours were that the company had some proprietary technology that was equal to and probably better than the Microsoft HoloLens unit, and that attracted a lot of interest from some pretty big players, including Google, Qualcomm, and American venture capitalist group, Andreessen Horowitz.

Magic Leap 1 gained attention not just for its potential as an excellent AR delivery system, but also for its slightly weird, amphibious, looks too. But the system was a lightweight head-worn device that was aimed at serious technical users in medicine and defence rather than the entertainment mass-market, and because of that, didn’t reach the appeal of lower cost VR units like Oculus Quest. But Magic Leap have been in the development lab again, and the Magic Leap 2 is due for release imminently.

Like the Meta Quest 3, the Magic Leap 2 is expected to hit the shelves some time between May and July this year, but this time it could be aimed at a much wider audience, and that could make it a serious contender against the Meta device. While AR and VR are subtly different – think of AR as an overlay on the real world, while VR is the creation of entire virtual worlds – Magic Leap has the potential to grab its own slice of the entertainment market.

Early release pictures of the Magic Leap 2 show a small, relatively unobtrusive headset with more of a designed look than the previous iteration, adding to its appeal. But it is the specifications that are going to turn heads. The tethered computer system is now fitted with an AMD chip which is said to be at least twice as powerful as the NVIDIA chipset that graced the original version, and there are upgrades to storage and RAM too. 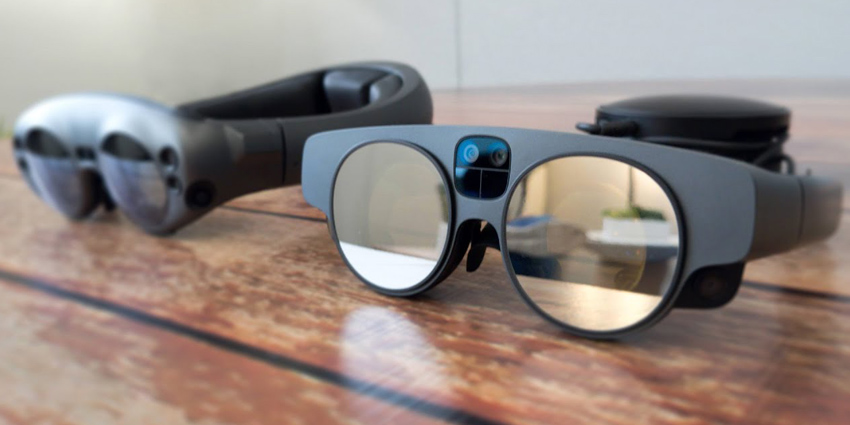 The headset itself has also been updated and is now said to weigh in at around 248 grams, making it significantly lighter than the 316 grams of the original Magic leap, and there are changes to the camera configuration to make the most of the technology that projects the digital light field and images straight into the user’s eye, and create more effective graphics. Added to this, the Magic Leap 2 has a new feature called ‘dynamic dimming’ which regulates the amount of light coming in through the eye-pieces from 22% down to an almost completely opaque 0.3%, helping the system deal with darker colours and blacks in particular, which AR systems struggle with.

By dimming the incoming light, it is expected that the headset will be able to display AR content in all light conditions, even outside, and making it a really strong contender for metaverse experiences. The dimming feature could also enhance potential VR experiences for the user, making the system much more flexible than AR/VR purpose-made devices. Also on the visuals front, the Magic Leap 2 has a much larger eye-box than its predecessor (despite being lighter in weight) and has an enhanced field of view of 70 degrees – up from the original device’s 50 degrees.

While there has been no firm mention of price, many pundits are expecting the Magic Leap 2 to hit the shelves at around $2,000, and making it a high-end device of the same ilk as the Apple AR system, or the apparently top end Project Cambria from Meta.

Whatever the price, we at Unity Developers are excited about the release of Magic Leap 2, and will be saving our pennies to be amongst the first to get one. Watch out for a first review.

Due to ongoing business expansion, we at Unity Developers require an expert Business Development Management Manager with extensive experience of…