There has been little more enticing over the last few years than the promise of Virtual Reality and Augmented Reality devices, and the promise to completely revolutionise our lives. VR and AR, we were told would make everything from immersive gaming to buying a pint of milk easier and more enjoyable (if buying a pint of milk can ever be seen as enjoyable), but have somehow kind of not lived up to it. It was just never quite right; the headsets were big and bulky, or you had to be tethered to a fairly powerful computer to drive it, or the equipment was a little too expensive for the ordinary person to really embrace the revolution. It was a revolution that kinda floundered.

We were promised good things in the future but they never seemed to get here. But then came the low cost, high connectivity, and untethered Oculus Quest 2, and what was promised suddenly became available. Many other manufacturers are now playing catch-up and with many new similar products both planned and already in the pipeline; the revolution is finally taking place, and we are all invited.

Even without the boost of the new generation of easy-access headsets – we may have to wait some time for AR to catch up – VR is still a fast-growing interest, with sales of VR headsets hitting over five and a half million units in 2020. And global businesses have risen to the challenge by embracing VR and making it a part of their sales pitch – a major part of the conversion funnel.

What’s that, you ask? Well, the conversion funnel is a well-established e-commerce term that shows the journey from awareness of a product to the desire to own it, and it has a number of specific steps, being:

1. Awareness. Make your customers actually aware of your products and start the process that will hopefully end with them making a purchase. Most businesses using e-commerce rely on attracting their targeted customers through advertising, social media and content marketing campaigns. VR can become a major part of this.

2. Interest. Having seen your products, hopefully potential customers gain sufficient interest to find out more. It may be through your website or via general internet searches, but this is the first part of them being hooked.

3. Desire. Your customer, while still only potential, has reached the stage where they actually want your product but are still undecided about an actual purchase. It might be a little too expensive, or they may see it as a bit unnecessary, but whatever the issue, now is the time to reinforce the purchase with personalised emails and other targeted content.

4. Action. You’ve convinced them to buy and now all they need do is convince their partner, once they have actually bought it, of course.

So, we have gone from the knowledge that something exists to the point where we have bought it, but what has this got to do with either VR or AR? Well, these are systems that are becoming increasingly important in the conversion funnel process, and a growing number of businesses are using VR as part of it, especially in the desire phase. If a company can reinforce the interest and desire parts of the process then they are more likely to get a sale.

Motorcycle manufacturer Yamaha, are using VR to show potential customers around their bikes. They can show detailed 3D models and renders of working engines, getting the customer mentally ready to owning one. Meanwhile, online retailers and alternatives to Amazon, Alibaba, are using VR to allow customers to stroll virtual shopping centres and browse goods ahead of placing orders, in the ultimate impulse-buy-fest.

The Amazon Home area of Amazon.com is pushing an AR feature where, when you get to the pre-order area of furniture, you can place a model of the item in your own space, letting you see what it would really look like. It’s still in its infancy, but it’s a great start.

All of these may seem to be helping us make a decision about a product, but what they are actually doing is pushing us along the conversion funnel, and ultimately getting us to buy more products. It may be slightly cynical, but the advances in VR and AR equipment have made it sure as hell fun!!! 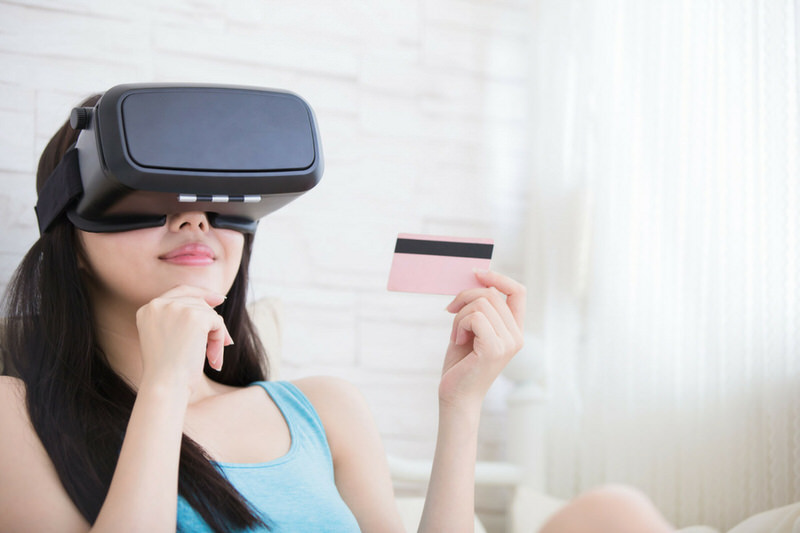