Almost two years ago, when the term “Coronavirus” first started popping up in headlines, it seemed as though it would be another Bird Flu, or SARS epidemic that would briefly impact the Far East, but we in the West would look upon from afar.

By the time that the virus had been given its official title of COVID-19, it was pretty much widespread, and quickly shutting countries down. For a few months, the World reeled from the ravages of a virus that was changing the way that we lived, and huge amounts of resources were being pumped into trying to regain some kind of normality. We hoped for a quick fix, but that wasn’t forthcoming, and so we cowered in our homes while medical science and Government processes sought a way out of the mire.

And now we have a number of vaccines which, regardless of your views on their effectiveness or morality, have been a testament to human ingenuity and scientific endeavour. Virologists have used every weapon in their arsenal to identify, clarify, deconstruct and combat a virus that has resisted us all the way, and has evolved to confound us just when we thought that we had it beat. To get to the root of it, we have had to employ new tools, and through this, Virtual Reality has shown that it is now a serious work tool, rather than just something for gaming with.

The use of VR in the workplace is a result of two things; increasingly powerful devices and well thought out apps and programs that allow people to conduct their business in a virtual way. In the field of medicine in particular, VR has been pushing boundaries, and has made an impact in a few ways, including: 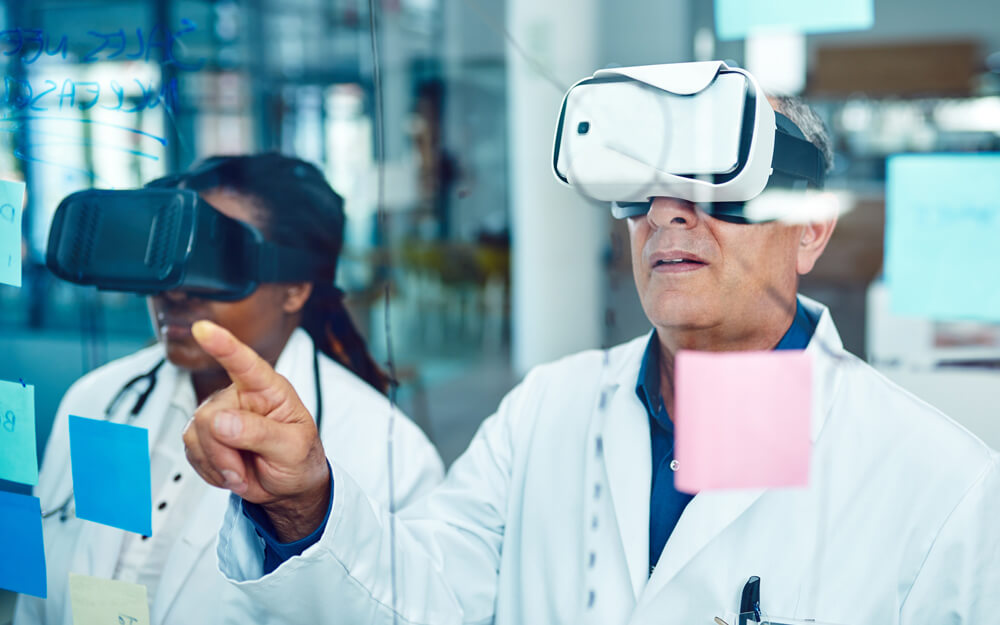 This last point is one of the major benefits of VR. In many cases, scientists and engineers are dealing with a world that cannot be viewed directly because of its diminutive size. We can’t see atoms or directly view their interactions, and so have had to infer what we believe is happening. Viral structures are not far behind and much of the delay in attacking COVID-19 was based on our lack of understanding of its structure. But with VR we can model atoms or even viruses in high detail, and create programs that will mimic their interactions, based on what we know from the laws of physics, and drug companies are quickly waking up to this potential.

Major pharmaceutical company Novartis has already employed VR systems to assist researchers in improving the molecular composition of medicines by allowing them to examine these 3D models at a bigger scale and in a natural perspective. Simultaneously, drug developer Pfizer is using virtual reality to enable researchers to digitally observe and examine the human body at the molecular level. A new research program has been aimed at examining the potential for using VR to analyse treatment options for the SARS-CoV-2 virus, and by extension, COVID-19 and its derivatives.

Science is an area in which VR is really showing its worth, and with the ground work being laid today, the next time that we have a major viral incident – and it is looking increasingly likely – medical science will be able to deploy these tools quickly to minimise the impact of infection, and to help uncover new remedies to combat them.