The Unity cross-platform game engine developed by Unity Technologies has been with us for the best part of 15 years, and in that time, it has just got better and better. The game engine makes it easy to create both two and three-dimensional worlds, simulations, and Augmented Reality (AR) games too, as well as finding extensive use in other industries too. Unity-driven graphics can be found in architectural applications, Engineering and Construction and even the film post processing industry, where it is used to enhance other media.

Key to the engine’s success is its formidable rendering capabilities that benefit from real-time global illumination and a physically-based shader to create photo-realistic worlds with expertly-handled and dynamic contrast. But the power of the system would be little without an effective render pipeline, and this is where the Unity engine really comes into its own.

The Unity render pipeline performs a series of operations that transfer the details of the scene and delivers them to the screen, including culling, rendering, and post processing procedures. However, Unity has three distinct render pipelines and picking the right one can be key to how well your final output is delivered. Of these three, by far the most effective and is the High Definition Render Pipeline (HDRP), used for delivering graphical output to high-end PC’s and gaming systems. 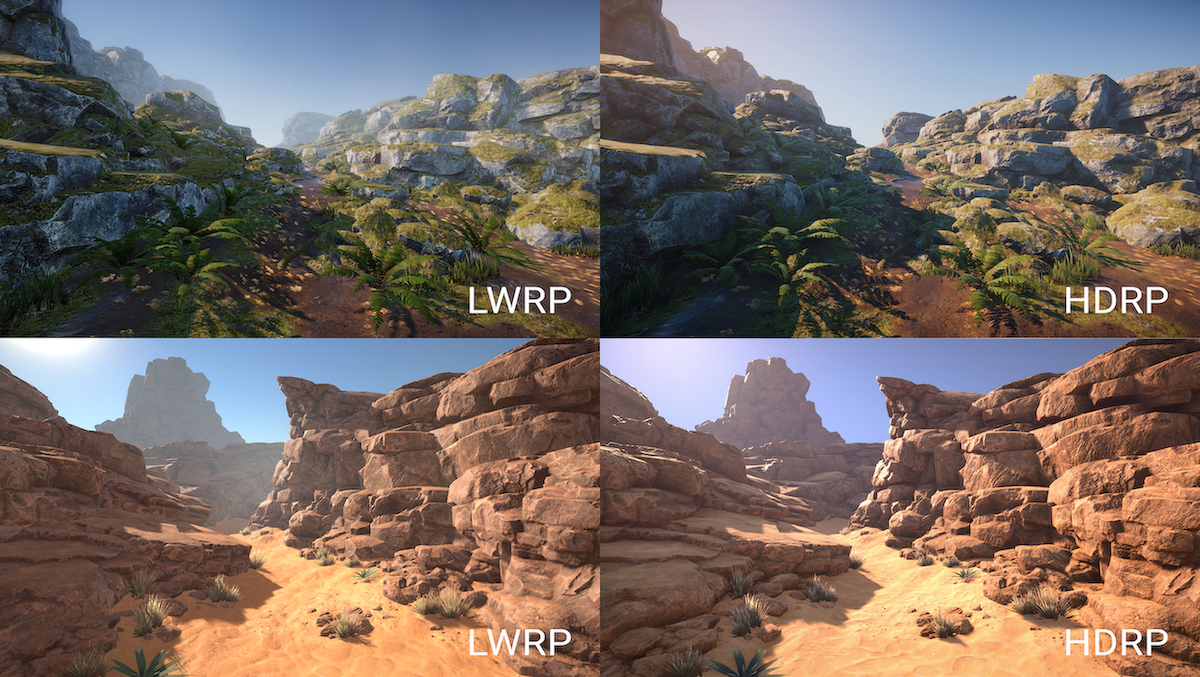 Unity’s High Definition Render Pipeline (HDRP) is a Scriptable Render Pipeline that lets the user create cutting-edge, high-fidelity graphics on high-end platforms, and deliver seamless content. Key to this is the Lit Shader, which helps the user easily create realistic materials. There are a huge range of options for effects like subsurface scattering, iridescence, vertex or pixel displacement, and decal compatibility, and all of these can be trimmed to create the graphics that your project needs. In addition, there are also a number of other shaders that add further effects, including:

Also new to the HDRP are a series of artist tools that help the user attain the levels of creativity that they would expect from a professional program. The HDRP already comes with a Visual Effect Graph, and Shader Graph, but is now equipped with new tools such as HDRI Sky with Backplate for asset workflow and Look Dev.

The HDRI Sky with Backplate is a new advanced mode in the HDRI sky palette, which creates a virtual geometry that can be textured using the bottom part of the HDRI image. It can fade at the edges, and it can also be used to render shadow maps on top of the otherwise unlit HDRI sky, creating much more natural looking output.

The Look Dev tool lets the user quickly check the look of your assets under a range of lighting types and conditions, and also includes some view modes that allow you to check each component of your materials. Using Look Dev, you can ensure that your final scene meets your lighting and materials expectations quickly and under real-application conditions.

All of these factors go together to make the HDRP the obvious solution for high quality output, without straining the processing power of the system too much. The HDRP pushed Unity forward as a high-end development tool, and gives users a huge new range of options for creating exciting, functional games and applications.